Showing posts from October, 2011
Show All

October 25, 2011
The R&A have completed their revision of the rules of golf in conjunction with the USGA for the next four years. The following Q&A has been lifted from the R&A web site :http://www.randa.org/


David Rickman, The R&A’s Director of Rules and Equipment Standards, discusses the changes
The Rules of golf, like the wider game itself, are constantly evolving. For the Rules of Golf 2012-15, a total of 101 proposed changes were considered. These ranged from the very minor - improved grammar or changes to cross-references - to some that would have resulted in fundamental changes to the way the game is played.

David Rickman, The R&A’s Director of Rules and Equipment Standards, talks through some of the key changes and others that were considered but ultimately did not make the cut.

A. The two changes I would highlight are the Rules concerning smoothing sand or soil in a hazard and the ball moving after the player has addr…
Post a Comment
Read more 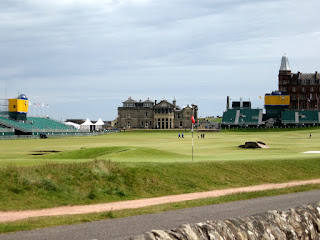 The following news was announced on the official web site of the R&A last week:

The Open Championship returns to St Andrews in 2015. The Open will return to the Home of Golf in 2015 when the 144th Championship is played at St Andrews from 16-19 July. It will be the 29th time that golf’s oldest Major has been held over the Old Course.


Africa’s Louis Oosthuizen won by seven shots with a 16-under par total of 272 when The Open was last held at St Andrews in 2010.


The R&A’s Chief Executive Peter Dawson said: “We are delighted to announce that The Open will be returning to St Andrews and the historic Old Course in 2015. St Andrews has proved time and again that it is perfectly equipped to host The Open and I am certain we will yet again see a worthy winner lift the Claret Jug. Players, spectators and officials alike will welcome a return to the game’s spiritual home and I fully expect that we will witness another thrilling Championship.”
Euan Loudon, Chief Executive of St Andrews Lin…
Post a Comment
Read more
More posts