Showing posts from April, 2015
Show All

The Open and The Claret Jug 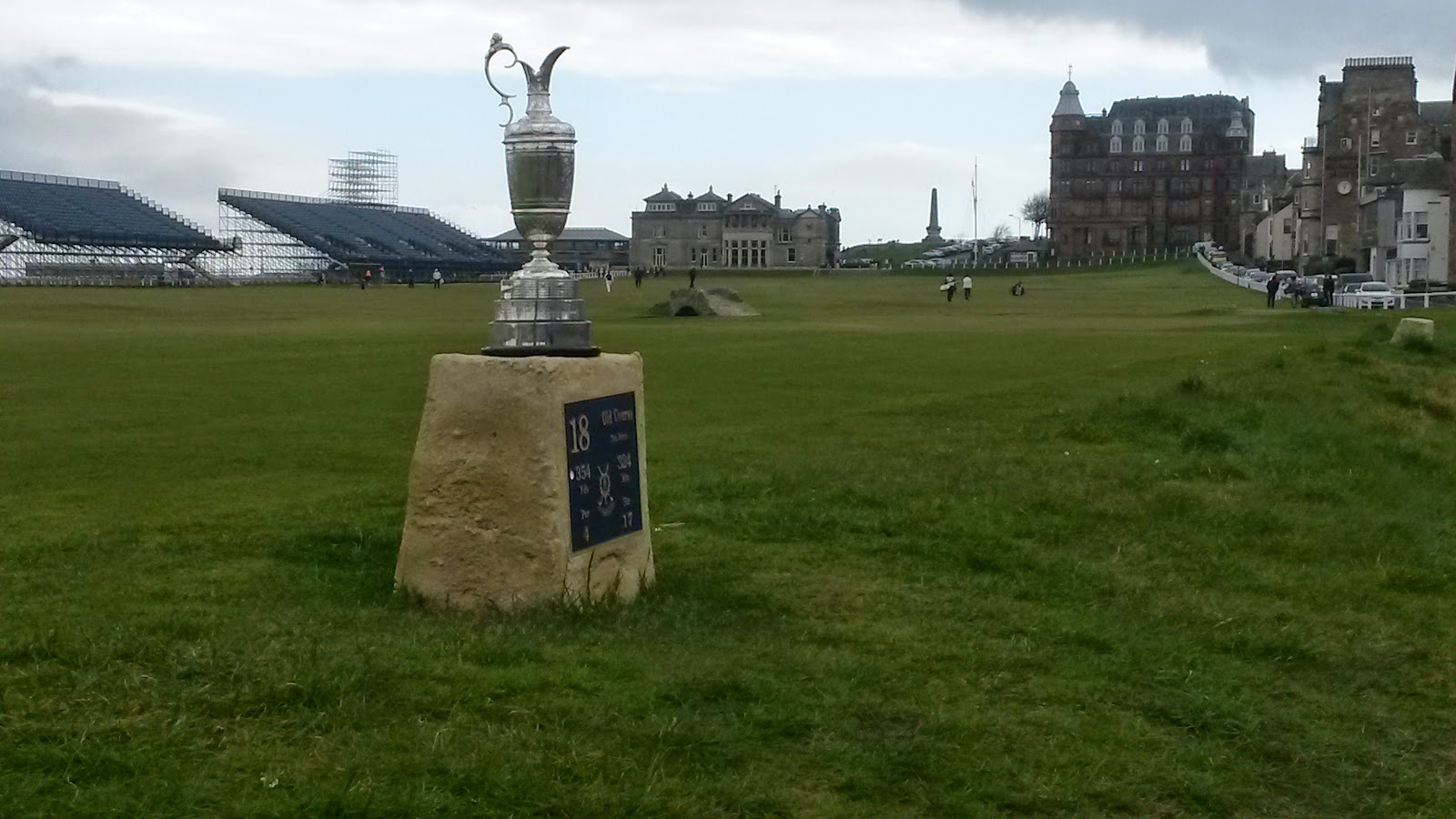 On Monday as I approached the 17th Road green, whilst caddieing on the Old Course St Andrews, I pointed out to my golfer that the Open's Claret Jug Trophy was being photographed on the 18th tee by the R&A's photographer and we might be able to get our pictures taken with it.


Timing is everything and we got lucky, also the photographer was very kind to let us have a few moments with this iconic little trophy that has been in existence since 1873 when it was presented at St Andrews after local golfer Tom Kidd who won with a two round total on the Old Course with 91 + 88 = 179.

Curiously the first name on the Claret Jug belongs to the 1872 Champion, Young Tom Morris. There was no trophy to present the previous year when Young Tom won the 12th Open at Prestwick, for the fourth time in a row, so they inscribed his name before presenting it to Tom Kidd.


Great to see the little trophy up close again and a delightful surprise for the golfers playing their first round on the Old C…
Post a Comment
Location: Saint Andrews, Saint Andrews, Fife KY16, UK
Read more 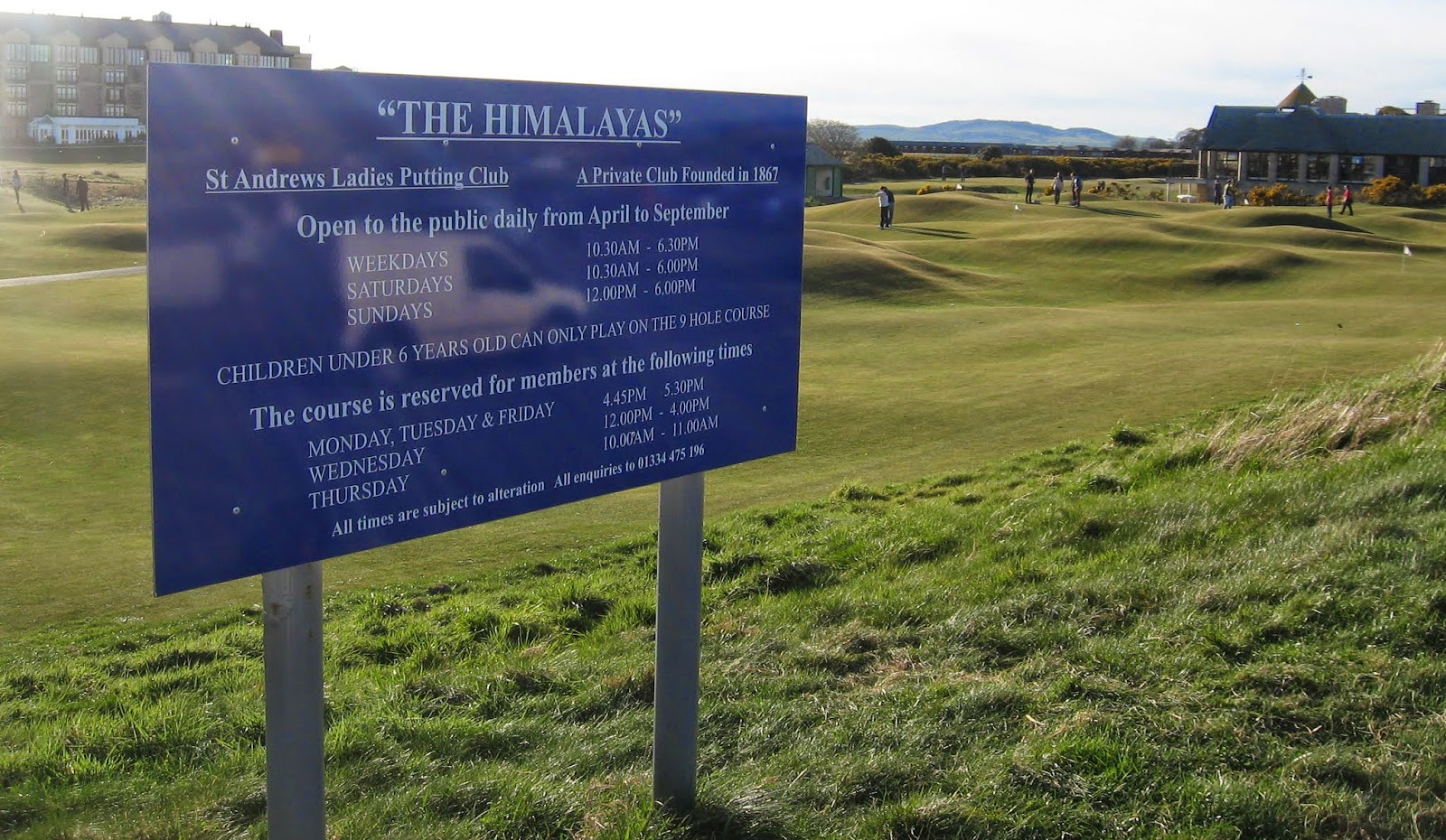 On a wonderful Easter Sunday in St Andrews we took the opportunity to take our guests Lauren (niece) and Catherine, from Toronto Canada, onto the legendary Himalayas Putting Green that sits adjacent to the Old Course St Andrews.

This is the second oldest 18 hole golf course in St Andrews, founded in 1867, and originally named as the St Andrews Ladies Putting Club and it stills plays a large part of golf in the town today.

The club have regular meetings during the week when it is closed to the public for a couple of hours and the Ladies play their matches. It is a wonderful tradition, kept very much alive.

There was some serious competition played in our match and no quarter was given as the following photographs show...

The Old Course St Andrews is regarded as the must play course for golfers from across the world when staying in this grand old town but I would argue that the Himalayas Putting Green is also a must play and one all can enjoy...Fore!

The St Andrews Caddies Charity Fund
Over the next 3 months a series of charitable events will be organised by the St. Andrews Caddies in support of The Keepers of The Green (Registered Charity SCO33783) which provides powered wheelchairs to residents of St. Andrews and local areas in greatest need of them. http://www.keepersofthegreen.org
St Andrews Caddies David Coyne, Jimmy Reid, Tam Robertson and John Boyne, with the help of their fellow caddies aim to raise upwards of the £3000 British Pounds required to purchase a powered wheelchair which will be presented to a local resident during the build up to the 144th Open Championship being played at St. Andrews in July 2015.
Current Running Total = £2250 British Pounds
Local Caddie Kevin Fogarty has created a website for the Charity highlighting the donations received and who from. A Blog, a Charity Auction page and an Events Gallery with some photographs of the fund raising so far are on the website.
http://www.standrewscaddiescharityfund.co…
Post a Comment
Read more
More posts