Showing posts from October, 2009
Show All

October 27, 2009
You have to be impressed with the local Glasgow boy Martin Laird and his victory last weekend at the PGA 'Justin Timberlake Shriners Hospitals for Children Open', clinching victory over George McNeill with a birdie on the third play-off hole.
Martin becomes the first Scottish golfer to win on the PGA Tour since 1988 when the legendary Sandy Lyle won three times: Greater Greensboro' Open, Phoenix Open and then the Masters.
In fact Martin is the first Scot to play on the PGA Tour since Lyle and only retained his card for the 2009 season by holing his final putt, in his last tournament, to finish on the mark at 125th on the money list. Looks like the boy enjoys the end of the season battle as he had a runners up spot in last months 'Legends Reno-Tahoe Open'.
The press here in Scotland have rightly accorded him some good publicity from his win and he has now become the topped ranked Scot in the world rankings at 106. Nearest to him is European Tour player David Drysdale…
Post a Comment
Read more 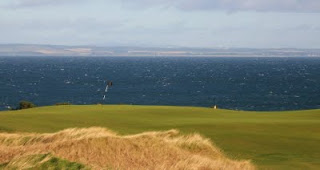 I thought you, my dear reader, may like to view some photographs that I managed to snap on a few holes of the Castle Course at St. Andrews which was opened in 2008.
As you will see it was an incredibly windy day with up to +50mph winds with gusts of 60mph! It is a wonder the flags stayed in the holes.
The 9th green appears to be suspended over St. Andrews Bay.

The intimidating Par3 17th tee. There is a bail out towards the left bunker.

The Par3 17th green and the ravine you have taken on!

LB making sure the 17th flag remains in the cup.

The approach to the Par5 18th green of the Castle Course. 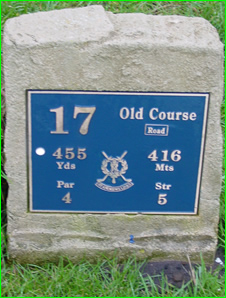 There has been some conjecture over the last couple of months about the positioning of the 17th tee on the Old Course at St. Andrews and in an official announcement today the rumours can now be confirmed...it is to be moved! Below is the news release from the R&A informing the golfing world of the change.

NEWS RELEASE ISSUED BY THE R&A
16 October 2009, St Andrews, Scotland: The 17th hole of the Old Course will be lengthened ahead of the 150th Anniversary of The Open Championship at St Andrews. The ‘Road Hole’, which has remained the same length for more than 100 years, will increase in length by some 35 yards to 490 yards. A new Championship tee will be constructed on the practice range of St Andrews Links Trust.


It has long been suggested that the 17th hole would benefit from additional length to restore the original challenge of the hole. In advance of the 1964 St Andrews Open, three-time Open Champion, Henry Cotton, recommended the alteration stating: “I would make a tee just …
1 comment
Read more

Simon on the Old Course. 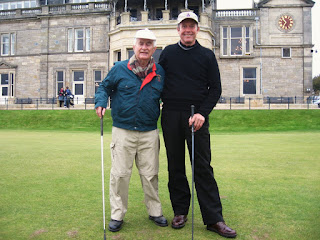 A close friend of my wife and I had asked if I would be able to get her Step Father, Simon, onto the Old Course for a round of golf. An ambition that had been long held. Always one for a challenge I confidently said that I could and we set about organising a date for the game, a hotel and booking a local restaurant for our evening meal.

I entered our names into the 'Ballot' for a tee time on Friday 9th October...we failed to secure one! I subsequently found out that the Ballot had been over subscribed by 59 other groups trying for a tee time. This meant that with Simon arriving on Thursday evening I would have to queue at the Starter's Hut first thing on Friday morning and hope that the Starter could join us up with a two ball.
When I arrived, at 6.05am, there were 11 golfers already in a queue! Good grief some had been at the hut since 3.45am...that is dedication for you.


The Old Course Starter did get us both out and onto the famous links at 10.20am whereupon we had a gr…
1 comment
Read more

October 05, 2009
The Alfred Dunhill Links Trophy has been won by the 31 year old Englishman Simon Dyson, who had a blistering start to his final round over the Old Course at St. Andrews, with six birdies in his first seven holes. After a few birdies in those initial holes on the Old Course you would normally be feeling pretty good about how the round was progressing, so goodness knows how Mr Dyson must have been feeling as he watched all those putts drop into the hole.
Go on and win the tourny my son...Your time has come.
My amateur golfer from San Francisco, Doug, had his best Dunhill for quite a while only missing the 'Team Event' on the final day by one shot. We managed to score -20 for the tournament but the cut for the final day was set at -21. Doug picked up 8 shots at Kingsbarns after starting out at -12. A wonderful effort.
Below I have copied/pasted a full run down of the final days events as reported via the great Scottish golf web site 'Golf Scotland'.

October 01, 2009
What a really good golf course Carnoustie is. Tough but fair and in todays conditions, a wee breeze, Autumnal cold with a watery sun it was perhaps as benign as it can get.
Our Pro golfer, Richard Finch, shot a -1 under par score that should have been better but for two bogeys at 16 & 17. Our team score finished up at -5. Not bad, though we will have to score at least that again over the next two days to have an outside chance of qualifying as one of the twenty amateurs allowed to play on Sunday.
Thomas Bjorn leads the competition after a blistering 64 at Kingsbarns Links. We are lined up at the Old Course tomorrow morning with a forecast of 'light rain' all day though thankfully the wind is to be light as well! The weather on Sunday is also 'light rain' but with winds of 20-25 mph! Thank goodness we have played and posted our score from Carnoustie!