May 21, 2009
The former British Amateur Champion, 2005, Heather McRae who is now working as an assisitant professional at the wonderful Gullane Golf Course, based forty minutes south of Edinburgh, has played herself into a starting spot in the Scottish PGA Championship to be played at Gleneagles in June.
Heather lined up at the qualifier, played over Downfield Golf Club in Dundee, and was one of 47 to get through the 18 hole shoot out, which will make her the first women golfer to contest the Scottish PGA since 1933.
I caddied for Heather during the 2007 season at St. Andrews in the St. Rule Trophy, one of top level amateur tournaments held during the golf season, finishing a respectable 10th. We then went on to play at the final qualifying over the New Course at St. Andrews for the Ladies British Open eventually won by Lorena Ochoa and in the resurrected Scottish Ladies Open played at the Carrick on Loch Lomond.
The Scottish PGA will be a great event and all the better for having Heather McRae to add some glamour to the field! Go beat them girl!
best golf courses Gleneagles Heather McRae Scottish PGA ladies golf

Popular posts from this blog 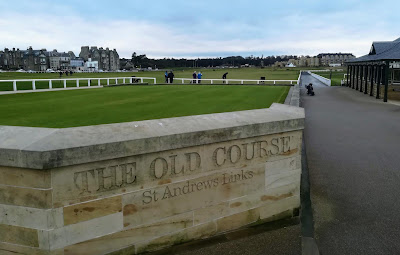 While celebrating our recent Birthday we managed to take advantage of the good weather during this first Spring week of March and enjoy championship golf at the Old Course St Andrews, the historic Elie golf club and finally on Carnoustie Championship the 2018 Open venue, where Francisco Molinari won with exquisite golf.


The tee time on the Old Course was achieved using the local Ballot (lottery) system that gives golfers an opportunity to play the legendary Links course. The Old Course in these early months of Spring is readily available to all golfers who wish to travel, use the Ballot, and golf in St Andrews.


Our guests traveled over from Glasgow, less than 2 hours away, for a celebratory weekend staying with us in the village of Kingsbarns 6 miles south of St Andrews.

A few days after the Old Course LB and I continued our golf with a first time visit to the Golf House Club, more commonly known as the historic Elie golf links, where golf has been played for over 400 years.  This gr…
Read more

What are the 2019 Old Course St Andrews green fees?

The 2019 green fees for the Old Course at St Andrews Links have been set and follow below, priced in Great British Pounds.

Please do not hesitate to contact Caddie Golf Tours to assist with your 2019 golf trip to St Andrews and Scotland...Fore!!! 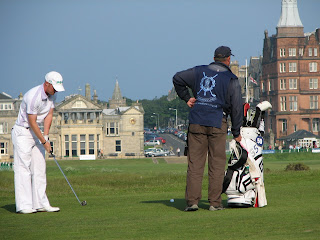 I began my caddie career at the St. Andrews Links by chance not by design. My wife had encouraged me to attend a four day course being held in St. Andrews by the then Caddie Master, Rick MacKenzie, who after it was finished invited me to join his caddie Team for the summer of 2002. I thought that one summer caddying on the Old Course was too good an opportunity to miss for an enthusiastic golfer like myself, so I accepted. I am still here.

There is a lot to enjoy about working on the St. Andrews Links not least the friendships that have been made with my fellow caddies and golfers from across the world. These are ties that remain strong and true. It is also amazing to think that you have become a link to caddies and golfers that have gone before stretching back centuries.

A few golfers that stand out from the +1500 rounds I have caddied at St. Andrews were the courageous blind lady golfer who went round the Old Course in 124 shots, a determined one armed golfer that b…
Read more